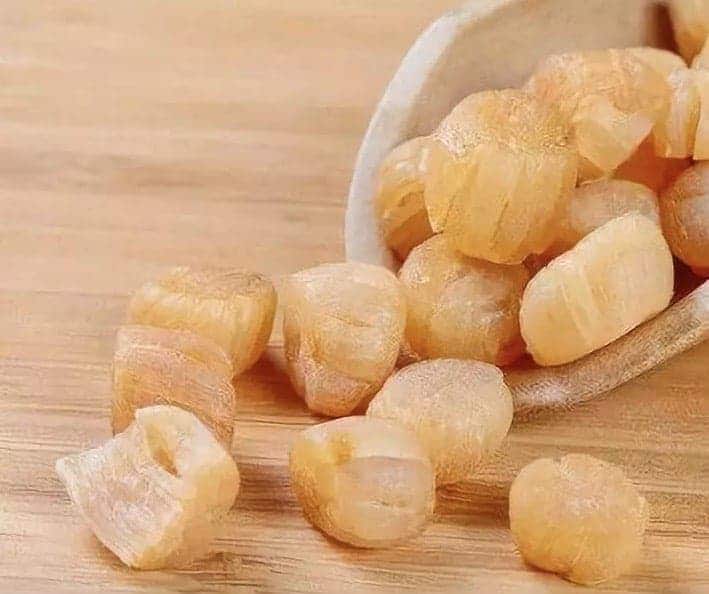 Conpoy (otherwise known as dried scallops) is a popular seafood product prepared from the scallop adductor muscle. It is also known as Jiang Yao zhu in Chinese to describe both dried and fresh scallops. The scallops are cured in brine and dried to make conpoy.

Why is Conpoy Popular among Chinese Foods?

People mainly made Conpoy to store a good deal of seafood for abundant supply. However, conpoy is now widely cherished by seafood consumers, giving it an elevated position among popular Chinese foods. One of the reasons people widely enjoy conpoy is its intense and detectable flavor.

Conpoy is classified under the umami flavor in traditional Chinese cooking. Because of its flavor profile, it is usually found in savory meals. The taste of conpoy is unforgettable when blended with common foods such as stir-fries, sauces, and rice congee.

Conpoy is one of the Asian food staples that cannot be mistaken for another food. Since it is made from seafood, conpoy has a fragrant fishy aroma. This flavor is accompanied by a distinctive and pungent taste that you can easily recognize in meals. The flavor also stands out in both sweet and savory meals, although it is used more in savory foods.

Conpoy is a type of cured meat, so it is usually a bit chewy, depending on the preparation. You can get conpoy in a variety of sizes, from small bite-size bits to large pieces. The smaller pieces are not usually as dry as the bigger size. That’s why they don’t have that chewy texture; instead, they are quite squishy and tender.

You can eat conpoy as a light snack because they retain the light and fresh taste of fresh scallops but in a more concentrated form. They also go well in mild-flavored dishes, like the conpoy congee (rice porridge) that is favored by most Chinese food lovers.

Conpoy is an excellent food staple for Chinese cooking. These scallops are often rehydrated by soaking them in a bowl of water for about 30 minutes before use. This step is not compulsory, but it helps to soften the conpoy for a better meal experience.

The rehydration makes it easy to split your conpoy into tiny muscle strands and spread them throughout your dish. You won’t need to rehydrate conpoy when you want to churn them into congee or broth. That’s because you need to cook the scallop over a considerable period. You can also keep the water and use it in the meal because it retains some of the delicious conpoy flavors.

It is important to note that there are two types of conpoy, depending on your location.

Then, there is the Chinese conpoy, which has a lighter taste and flavor. The taste is also not as distinctive as the Japanese one, but it is also delicious. This type of conpoy is a bit cheaper, although both are quite expensive. You can use them in soups, light sauces, and stir-fries.

Fresh conpoy is also a common component of Chinese cuisine, although it isn’t used as much as the dried ones. It occasionally features in light soups and noodle dishes with a lot of eggs.

How to Cook Conpoy?

The most popular use of conpoy is in XO sauce, a rich, savory-sweet sauce that is eaten as a dipping sauce, used for cooking, or eaten on its own. Due to the high price of conpoy, this is one of the most popular ways in which conpoy is eaten.

Conpoy is also a good supplement for protein in many meals. You can add a bit of cooked conpoy to your stir-fries to enhance the flavor, or use it as a flavor booster in your stews. Of course, we cannot talk about conpoy without mentioning the sticky rice porridge, congee, in which conpoy is a prominent component.

Besides being a delicious addition to meals, conpoy is one food staple with a decent number of health benefits. Most people agree that it is healthy considering its generous protein content, but some people feel skeptical about it. Conpoy is an excellent product for healthy slimming, especially for women.

It is rich in protein and also contains iodine, fat, and Vitamin A. Conpoy contains magnesium and potassium, which can enhance cardiovascular health. According to health experts, scallops pack a whole lot of nutrients that do not only immunize the body against colon cancer but also prevent heart disease.

Conpoy is substantially rich in Vitamin B12. Considered an essential nutrient, Vitamin B12 enhances the body’s ability to convert homocysteine into several harmless chemicals. Increased levels of homocysteine can lead to heart attack, stroke, diabetic heart attack, and atherosclerosis. So conpoy can help you keep these conditions at bay.

Conpoy readily secures a place among the top-rated seafood widely admired by Chinese people, thanks to its appealing taste and culinary versatility. It also has a lot of health benefits to add to it.

Conpoy is one lovely food with both a distinctive mild flavor and a versatility that isn’t common among umami foods. It is suitable for searing, boiling, stir-frying, steaming, blanching, frying, stewing, and various other cooking methods. Irrespective of the sort of cuisine you’re fond of, you can be sure that you’ll still make a lovely dish with conpoy.

If you’re an ardent consumer of seafood, the chances are that you’ll have an excellent preference for conpoy not only for its palatable and unique taste but also for the added health benefits it gives.