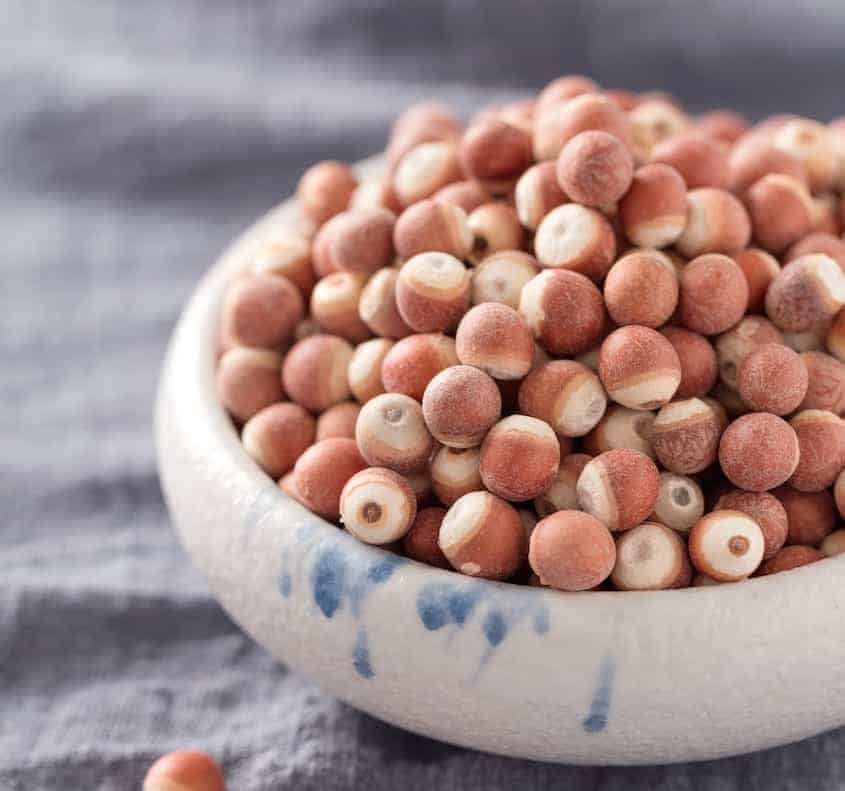 Gorgon nut has its botanical name as Euryale Ferox and can also be called fox nut, Makhana, or Qian Shi in Chinese. Gorgon is an annual aquatic plant that is part of the genus Euryale; hence, a type of water lily. The fruit of this plant is a round, white, and small seed.

Why Gorgon is a popular food ingredient?

Qian Shi is a nutritious and organic food, generally used in making healthy dishes and also eaten as a snack. This nut contains low fat and a high amount of carbohydrates. Hence, it can be a whole meal on its own. Additionally, Gorgon can be used as a treatment for rheumatic pains and arthritis as it has little or no side effects.

Gorgon is used when making soups, and you can also add it to your cereals to increase its nutritional value. Also, you can use it in a variety of dishes and recipes because of its medicinal benefits.

Gorgon nut is the edible seed of the Makhana plant, and it can be roasted or used as a complementary ingredient in any recipe of your choice. More often than not, it is dried and snacked on; hence, its taste is relatively sweet. As a result, it is mostly incorporated in meals as a dessert; consequently, a healthy, sweet snack.

Seeds of this plant are usually branded as tasteless or flavorless. However, the Gorgon nut stands out because of its taste and slight flavor it adds to meals. Additionally, it doesn’t have a particular smell to it when processed or not.

Although it is common in Eastern Asia, you could still pay a small fortune to purchase a sizeable amount because of its properties. You can buy Gorgon in China, as well as other Asian countries and even western countries. Additionally, you can use Gorgon powder in your tea and other healthy drinks.

How to use Gorgon for Chinese Cooking?

Qian Shi is a versatile and one of the exotic aquatic fruits in China that can be cooked and eaten alone or even incorporated in meals. Asides being a remedy to some ailments, you can cook this nut in diverse ways depending on your recipe of choice.

Gorgon is used in different recipes in its powdered form or as a whole seed. This is dependent on the kind of meal you want to make. For instance, for health purposes, Gorgon is ground and used to make a tea either alone or with some herbs.

As a snack or dessert, Gorgon can be stir-fried, roasted, or eaten raw. Additionally, you can slow-boil Qian Shi in a stew to give it a different taste and aroma, while eating healthy as well. Also, you can make a soup with Gorgon and other ingredients like chicken, dates and lotus seeds. Any recipe that includes Gorgon nuts is tagged as healthy and fit for consumption.

Do not consume excessively

Although Gorgon is healthy, you still need to eat it in a moderate amount. This is because excessive consumption of Qian Shi can lead to bloating or constipation, because of the presence of starch.

Ensure that you soak it before using

Gorgon nuts are mostly dried chemically as a means of processing. Therefore, when you purchase these nuts, it is essential to soak it in water for some time. This will allow the sulfur contents used in processing the nuts to come out.

Qian Shi is usually recommended for individuals with different health conditions, including diabetes. However, to avoid side effects and other complications, it is best to consult your physician before taking gorgon nuts. This is even more important if you are currently on any medication.

Do not use if you are allergic

You may need a recommendation if Pregnant

As a pregnant or lactating woman, it is best to consult your doctor before consuming Makhana. This is because it is believed to have some effects on your baby.

Apart from being a sweet snack, Gorgon is used traditionally as a health booster in the Chinese community. These nuts contain low fat, phosphorous, iron, and other nutrients, as well. As a result of these components, Gorgon is generally healthy and improves the health conditions of those who consume it. Here are some of its health benefits:

Diabetic patients always suffer from an inability to make or use insulin; hence, difficulty in managing their blood sugar level. Gorgon has low-fat content and contains fiber. Therefore, it regulates the release of carbohydrates in the intestines, thus, blood sugar levels.

Gorgon is a natural source of plant protein and has higher protein content than most grains. This protein regulates body metabolism and builds tissues; hence, it is a great natural weight loss ingredient.

3. Treatment of the Kidney

Makhana is commonly used in China to treat kidney disorders. This is because it regulates blood pressure and allows enough blood to flow to the kidneys. Additionally, it heals urinary diseases and fights kidney failure.

Gorgon, also known as Qian Shi, is a significant source of plant protein and is used specifically for its health benefits. It has been incorporated into the western world and other cultures because of its ability to pair with different dishes. Additionally, Gorgon has been undergoing a series of tests to make it a medically accepted drug component.

Qian Shi is used to making tea, soups, cereals, and also eaten raw, roasted, or fried. The different ways in which it is prepared helps to preserve its sweet taste. Additionally, its mild aroma leaves your meals in its original state while adding more nutrients.

Allen is an expert product reviewer who spends thousands of hours testing products and sharing professional tips. He is also a foodie that loves food, dessert, and smoothie.

I do t think gorgon nuts are lotus seeds? Lotus seeds are lian zi (Nelumbo nucifera) while gorgon fruits are Qian shi (Euryale ferox). But they are both in the same plant family nymphacea. And they are both astringent and stop diarrhea and also both treat spleen and kidney in TCM so are good for leakage issues of lower jiao but lotus seeds also calm the spirit and deals with insomnia issues which gorgon fruit do not. While gorgon fruit help eliminate damp which lotus seeds do not. So there are some differences