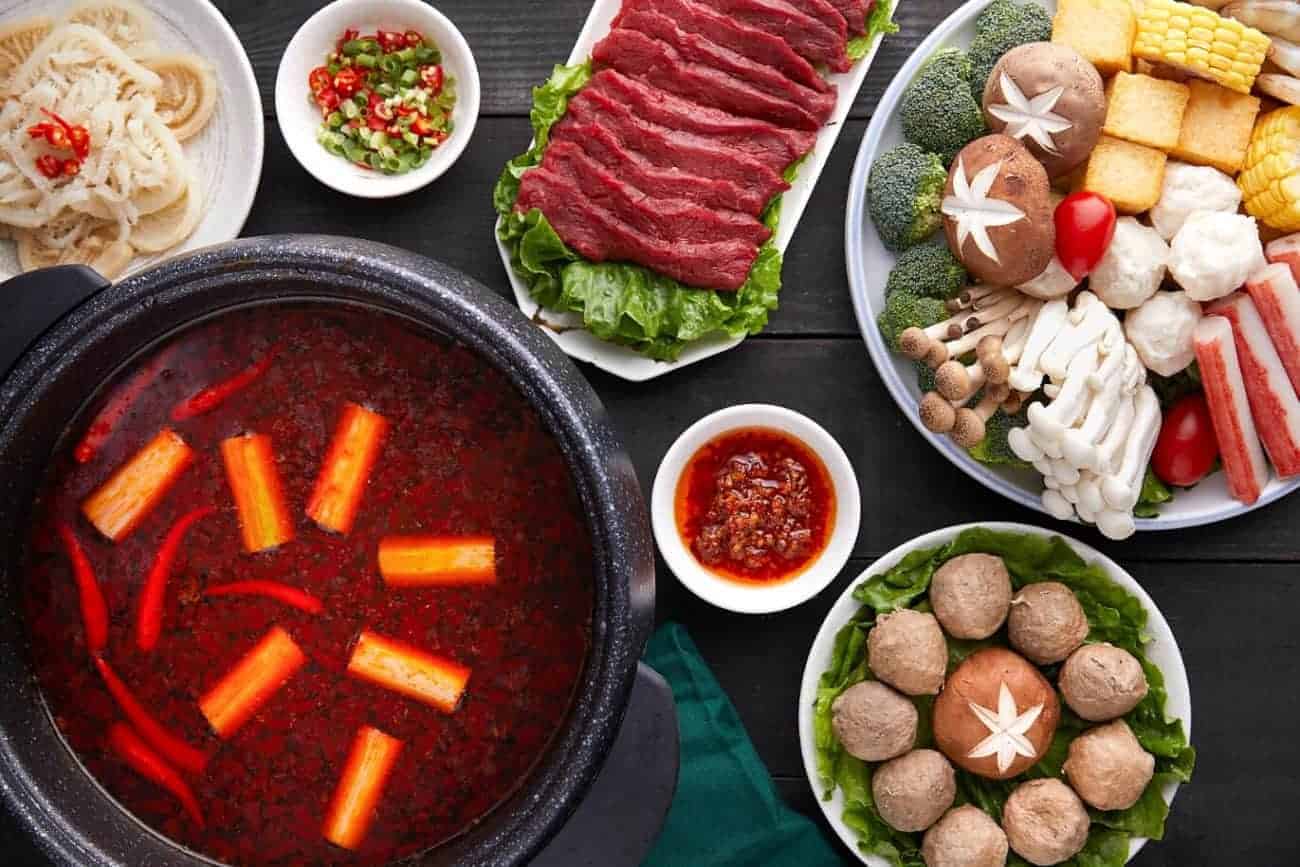 Where is Hot Pot From?

The Chinese Hot pot is one of the most popular dishes in China, and its history can be traced as far back as a thousand years ago. One of the many theories of its origin can be traced to the ancient Mongolian warriors. The warriors usually camped outside and generally had dinner together circled around a big pot on the fire. It offered an avenue to keep warm and eat at the same time.

Some historians even have an opinion that some soldiers improvised for the absence of a cooking pot with their battle helmets. The love of Chinese people has remained the same for this particular dish until this day. While there might be several accounts of how the dish originated, one thing remains constant. The method used in preparing the hot pot hasn’t changed much over the years. The concept is still all about having a steaming broth on fire and adding various raw ingredients to it.

The Chinese Hot pot (also known as fondue or steamboat) is a dish that is made up of various vegetables, raw meats, dumplings, noodles, tofu as well as seafood. These listed items are usually placed into a pot of steaming stock with the aid of chopsticks to cook these items together. Subsequently, these items are removed with the help of the same chopsticks, and they are usually served with varying options of meals like rice and tofu. Hot pot cuisine has become more than just an ordinary dish in native China; it has become more of a culture.

Why is Hot Pot Precious to Chinese?

Chinese hot pot is continuously ranked as the most popular cuisine in China. While this might seem a small feat on the surface, one only has to take a look at the population of China to appreciate it. It could be argued that the Chinese love the hot pot because of its tasty flavor. However, their love for this dish obviously goes beyond the content on the plate. The dish serves as a uniting factor for most Chinese families and friends as they get to sit, talk, wine, and dine over a delicious plate of hot pot.

Communal dining is a huge part of Chinese culture, and the hot pot represents a great symbol in this respect. Another essential factor that contributes to this love affair is the popularity of the dish amongst diverse ethnic groups, regional provinces, and acceptance amongst all age groups.

An intriguing part of the Chinese hot pot is that one can customize it to suit one’s desired taste and appetite. One can make a steamy and delicious broth of one’s choice from pork bone, tomato, seafood and even mix it up with threads of Enoki mushroom, plates of slices of raw rib eye as well as silken tofu to be cooked in it. One can even decide to make one’s dipping sauce to apply once the vegetables and proteins have been prepared.

How to Prepare Hot Pot at Home?

There are several methods of preparation for a tasty plate of hot pot, and there is room for flexibility and creativity. One can easily find the ingredients for preparing hot pots in local markets, and they are quite inexpensive.

1. Preparation of Soup Base

We first put the pot on the gas burner, after which we add 20ml vegetable oil when the pot is completely dry. Then, we add two bags of mushroom flavor hot pot seasoning as well as onions, sliced garlic, Sichuan pepper while continually stirring the contents of the pot.

Then we add warm water to over three-quarters of the pot, and we leave the pot on the burner until the soup base starts to boil.

2. Preparation of Sauce and Ingredients

Mix the chicken stock, water, vinegar, soy sauce, sesame oil, ginger as well as garlic to boil. The chicken is added and then simmered for 5-7 minutes when it is cooked through. Noodles are then added, stirred, covered and subsequently removed from heat. The vegetables are chopped and placed in serving bowls. The soup base is served on top and allowed to sit for five minutes.

There are over 30 variations of the hot pot preparation styles mostly grouped based on the districts they originated from. We are going to cover the six most popular Chinese hot pots.

This hot pot is generally known by its general simplicity and the application of traditional copper pots in its preparation. An essential ingredient in this variation is the use of sliced mutton. This particular variation of hot pot is exceptionally pure and focuses on the overall quality of ingredients being used.

Some of these ingredients include fresh and fleshy vegetables as well as tasty meat. Rather than the conventional way of adding these ingredients to the broth, they are instead cooked in the clear water of lightly flavored stock as well as ginger and some scallions added.

Widely regarded as the hot pot capital of China, with over 15,000 hot pot restaurants scattered all over the district, it is clear to see why this hot pot is named after this district. The Chongqing hot pot is known for its style of heavily flavored stock and hot spices. An exclusive ingredient in the form of premium butter gives the broth much needed unique and refreshing taste that goes along with hot chili. It is usually taken with fresh maodu (cow stomach).

This hot pot varies a little from other hot pot preparation styles. While most of the other hot pot styles depend on the use of meat, the spicy and sour makes use of fish as well as other seafood in its preparation. Some of the main ingredients include rice and tomato, and it is very popular in the Cantonese hot pot style.

This hot pot is beginning to gain widespread popularity in China due to its uniqueness. It’s one hot pot that vegetarians will like due to the fact that less emphasis is placed on meat in its preparation. It has a rich stock flavor that combines well mostly with vegetables as well as other edible mushrooms and flowers.

The right words to describe this style of hot pot are fresh, unique, and delicious. It combines well with an array of spicy dipping sauces combined with chili and sesame oil.

One cannot but admire a variation to the conventional ways of preparing hot pots. The coconut chicken hot pot offers this and more. It is made with a combination of Hainan chicken as well as coconut milk as one of its top ingredients. It is often considered one of the healthier hot pots due to the absence of butter and fatty oils in its ingredients. The hot pot base could even be used as soup due to the tasty nature of the dish.

Sichuan province in China has a reputation for its delicious cuisine. The Sichuan hot pot is synonymous with this premise as it serves up a mouthwatering and spicy impression. A quick stop in the Sichuan province calls for taking a plate of this tasty cuisine.

This style of hot pot is a bit different from the others, and it originates from the Jiangsu-Zhejiang cuisines. It is usually prepared with chicken stock as well as hot pot ingredients cooked together with chrysanthemum petals to bring out that spicy and tasty flavor.

The vegetables should be added to hot pot after meat, because vegetable can soak aroma and taste from the soup. Hot pot will be less taste after cooking vegetables.

Hot pot usually does not need main course. The noodles only play a role as side dishes that serve people who like them. Usually, meat is considered as the main course food ingredients. If someone is still not enough, they can have noodles if desired. Cook noodles after meat.

The cooking time for noodles should between 3 to 5 minutes. It depends on its constituents, such as rice noodle or potato noodles.

Why is Hot Pot Perfect for Everyone?

The Chinese Hot pot is a perfect cuisine for a family get together, and the fact that it’s inexpensive makes it all the more interesting. Eating the Chinese hot pot serves up the very best of communal experience. It should be done with people gathered around the pot while eating their food, biding time for the broth to cook or even adding their sauces into the broth and sharing great memories in each other’s company. The hot pot meals usually linger for some time as one tends to eat it in tiny bits while it is still being cooked.

The Chinese hot pot is not selective when it comes to dietary needs as there’s a version of hot pot for everyone; from those on a strict vegetarian diet to the meat lovers. The diverse nature of the hot pot means it could be made with only vegetables for vegetarians or even just meat as well as seafood.

In conclusion, the Chinese hot pot serves its purpose of being both a tasty cuisine as well as a uniting entity amongst people. The inexpensive nature of the cuisine is also a delight as well as the easy preparation method. While cuisine originated from China, it’s beginning to gain more and more fans all over the world.

If you have your own version of Chinese hot pot, feel free to share with us in comments.