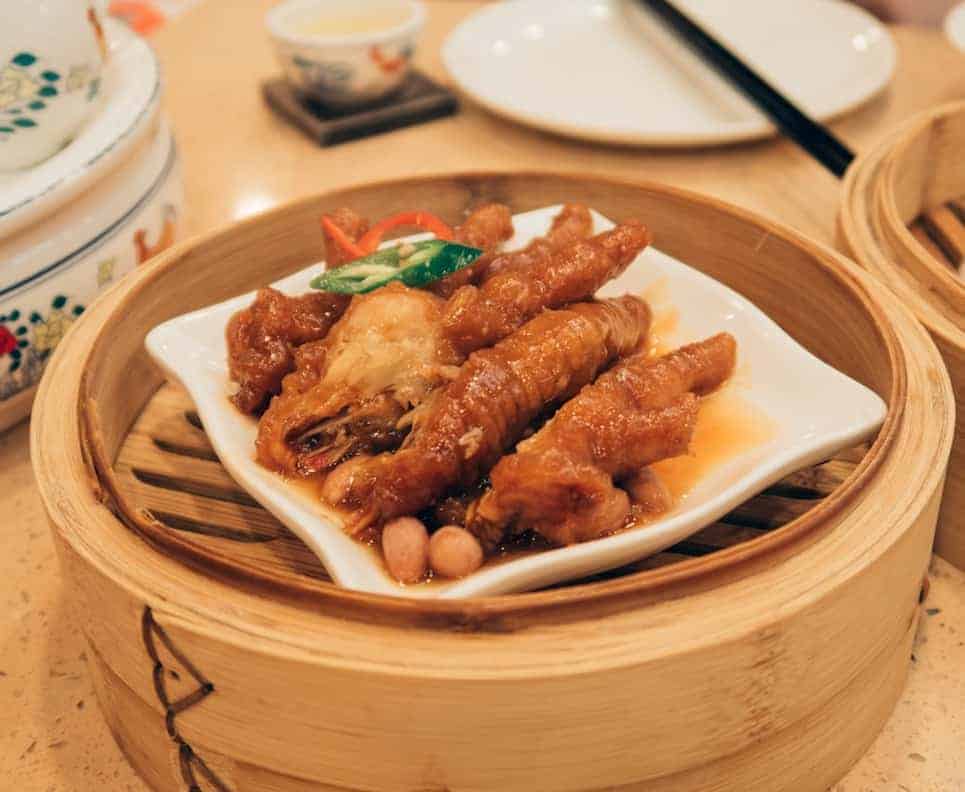 Why Chicken Feet Is Popular In Chinese Food?

Chicken feet were originally incorporated into Asian dishes due to the Chinese age-long culture of not wasting food. Truth be told! Chicken feet are the least appealing of all chicken parts. It contains little flesh and has the texture of crocodile skin. Despite the odds surrounding it, chicken feet is actually a delicacy in China and is served in most restaurants the same way other chicken parts are ordered.

In addition to its tastiness, Chinese people are a fan of chicken feet for its health benefits. The skin around the feet is said to be rich in collagen, which improves the elasticity of our skin. In most western countries, chicken feet are considered a waste, but in China, it’s actually the most valued part and also comes cheap.

Chicken feet Tastes like every other part of the chicken except that they differ in texture. The feet are covered with tough sheets that are removed before they’re cooked. Hence, the texture isn’t quite as stringy as you might have imagined.

If properly cooked, chicken feet actually do taste good despite having little flesh. If your chicken feet are overcooked, you might not want to taste this dish again as most of the flesh would have been ripped off, leaving you with just the bones.

Due to its texture, Chicken feet are cooked in a variety of ways and combined with heavily spiced dishes that give it a different taste to other parts of the chicken. No matter the method used to prepare chicken feet, all are aimed at making it soft in the mouth. Since it contains little flesh, a lot of precaution is taken to ensure the flesh isn’t wiped off when cooking. Hence, they’re never overcooked.

The best taste of chicken feet comes from when they’re prepared in a broth. Here, they’re gelatinous and also easy to chew not to mention its taste. If you want to enjoy chicken feet, start from the toes, biting one knuckle at a time and chewing off the skin and cartilage before moving to the ankle which is more of bone than flesh.

How to Cook With Chicken Feet?

For those preparing chicken feet for the first time, you must know that there’s still much to be done before it becomes fit for consumption. Whether you decide to fry, roast or boil, ensure the claw, as well as the outer scale, are clipped off. These parts are unhealthy, giving the number of germs and bacteria they come in contact with.

The popularity of chicken feet is largely owed to dim sum; one of the most popular dishes in China. Dim sum is a small bowl of steamed chicken feet. Basically, the feet are deep-fried and braised to soften the skin.

The taste of the feet is altered by the ingredients used in preparing it. Hence, you can’t attribute one single taste to it since everyone has their own recipe. Chinese dim sum is heavily spiced due to the mild taste that comes with chicken feet. To salvage that chicken taste, ensure you don’t cook for more than 20 Minutes as the skin tends to become rubbery if overcooked.

This isn’t a type of dish but rather a method of cooking which has become synonymous with chicken feet. This is done to retain as much skin on the feet as possible, but this also toughens the skin up making it easier to absorb nutrients.

Fried chicken feet are easy to use, which accounts for their regular feature in a whole lot of dishes. One thing about fried chicken feet is that they’re tough inside out; hence, they’re often marinated or braised. If eaten alone, they become very chewy, and the taste of chicken is hardly noticed.

Most people believe both deep-fried and fried chicken feet produce the same results. But there’s a huge difference between both methods. Deep frying makes the feet tender on the inside and crispy outside.

If the chicken feet have much skin, you might end up splashing oil on your body if this is your first time cooking it. Rather than deep-frying, you can also roast in an oven but ensure they’re slow-cooked over low heat before transferring to your oven. Roasted chicken feet are also delicious and even crispier than deep-fried ones.

The Chinese oyster sauce chicken feet is another popular dish in China mostly prepared by the people of Yum Cha. The method of preparing this dish is quite unique. The key to arriving at the taste of this dish depends on how well you fry. The whole of the feet must be properly fried before they’re boiled. If not appropriately fried, the skin on the feet will be tough, and the dish will be less tasty.

Chicken feet are highly nutritious, which comes as a surprise given the fact that it contains very little flesh. If prepared alone, bone broth contains a significant amount of vitamins and minerals but the addition of chicken feet ups the tempo. The amount of nutrients our body pulls from those little feet is incredible. A recent discovery has led to the conclusion that the feet contain as many nutrients like other parts of the chicken.

The body system easily absorbs the protein, calcium, and collagen gotten from chicken feet. These nutrients play an essential role in preventing the occurrence of arthritis, joint pain, and inflammation.

The skin around the feet is also beneficial to the human body. It packs a lot of collagen, which improves skin elasticity, thereby making the skin ever fresh. The skin isn’t the only part that benefits from collagen. This substance promotes healthy gum and also boosts the immune system to fight against diseases.

Basically, if you want your chicken feet to be crispy, frying is the way to go, but if you want it soft, tasty and enjoyable, you’re better off braising or preparing with a sauce. It’s also better to fry before braising as it allows the skin to absorb more flavor, which makes any dish it’s prepared with tasty.