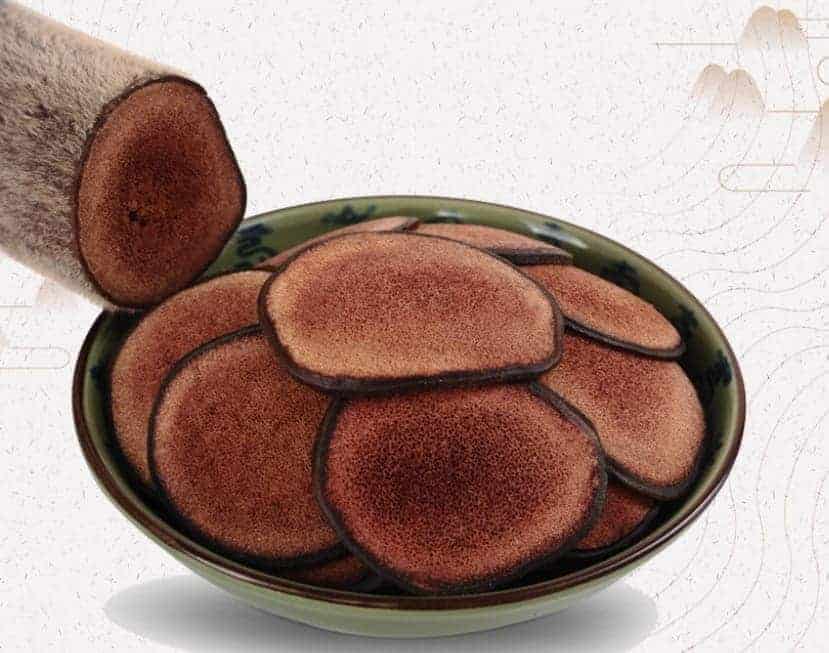 Why Is Velvet Antler Popular In Chinese Cuisines?

The Velvet Antler is popular in Chinese dishes for its ability to aid recovery from injury and other diseases. In the western world, Velvet antlers would have been considered as waste, but credit to the Chinese, they’ve made the world realize that the least edible part of animals can serve a purpose in dishes even if it does little to enhance its flavor.

In simple terms, the Antler is the branch-like structure that forms the horn of a deer. The Antler is a bonny structure covered by a skin called the Velvet, which supplies oxygen and other forms of nutrients. This substance contains a growth hormone which induces growth in human. The substance is used by athletes for bodybuilding and to initiate quick recovery from injury.

The deer Velvet antler has a warm nature, but it’s salty. They’re mostly chewed by dogs, while humans prefer to extract their tonic rather than biting on it. Describing the taste of Velvet antler would mean taking all 13 species of deer into consideration. Fortunately, the Chinese have narrowed their choice down to the Sika deer since its the most popular in the region.

The Antler of the Sika deer is similar to the human bone. They have the same nutritional content except that the former is much more tender. Like the human bone, deer antler doesn’t have a unique taste and isn’t one of the ingredients you will bank on to recreate an Umami flavor of Asian dishes.

Velvet Antler is made into powder, which is taken as a supplement. However, it can be prepared into a tonic or soaked in alcohol to make it soft before making it into wafers. The thin slices of this substance can be eaten whole. It’s sweet but salty, but its saltiness is a bit higher due to the presence of minerals. When consuming this substance, you take solace from its nutritional benefits rather than its taste.

How To Use Velvet Antler In Chinese Cuisines?

It’s possible to take advantage of the medicinal content of Velvet antlers without going through the trouble of cooking it. They’re readily available in both online and offline stores. Its powdered form is quite effective, but I personally prefer enjoying it as a soup rather than consuming the processed one. Only God knows what they’re combined with.

From the appearance, this soup is watery, and it is very easy to pick out its ingredients. The Antler is sliced into tiny round pieces and allowed to cook in boiling water for 3 hours to make it tender. The soup can be combined with several dishes and can be eaten alone if you don’t mind its bitterness. The presence of chicken ensures you have something to chew on, but this doesn’t mask the taste of the two dominant ingredients.

This soup tonic improves the body’s immunity, thereby improving the body’s defense against diseases. It also helps you heal from the wound, and its warm nature makes it even more soothing for the heart and lungs. Overall, this soup is sweet, but the presence of fresh ginseng makes it slightly bitter.

Deer Velvet black bone soup is enjoyed with alcohol in China, and it’s more suitable for adults rather than kids. The combination of black bone and Velvet antler helps regularise menstrual cycles and also improves yin in addition to strengthening yang.

This broth is heavily spiced and has a strong taste as opposed to the mild taste of ginseng chicken soup. Once again, the Antler is boiled separately until it becomes tender. The black chicken is spiced with cinnamon, garlic, and ginger. Water isn’t added to the broth as most of its moisture is gotten from water, which accumulates in the chicken.

The Velvet is added at the end of cooking and allowed to simmer with the rest of the ingredients for a few minutes before the dish is served.

It’s possible to substitute the black bone for regular chicken. However, you should know that regular chicken wasn’t overlooked for no reason. Black bone was added for its medicinal benefit rather than its culinary advantage.

If you’re feeling lazy about preparing soup, it’s possible to enjoy Velvet antler with the tea still. While you can get its tea from stores, I advise you to make yours at home if you have access to fresh deer Antler.

All you have to do is throw Antler in warm water and allow it to infuse in water. In this case, it doesn’t need to be tender. The tea is ready as soon as the water turns dark brown.

The Antler is the bony part of the deer while the Velvet is the outer covering made of cartilage, which supplies the Antler with nutrients. Velvet Antler holds the key to a lot of health problems ranging from high blood pressure, hormonal disorder, kidney disease, and infertility.

The majority of antlers’ health benefits have been centered around muscle building as well as improving stamina during sex. According to research, this substance improves blood flow as well as the secretion of testosterone, thereby helping you last longer in bed.

Recently, most athletes have finally come to accept the significant role of Velvet antlers and how it improves their performance. It contains growth hormones that tone the muscle within a short period. Adding its powder to your meal can help you grow leans muscles and improve your performance at the gym.

Like every Medicinal substance, Velvet antler has its own side effect. Ensure you seek advice from a physician before using its powder or tonic. You should start with a little dose and increase slowly as you see improvement.

It isn’t all the time you find a substance as healthy and medicinal as deer Velvet antler. However, there are a few precautions you have to take when consuming this substance. There are still lingering concerns about its safety to pregnant women; hence, seek the advice of a physician before using it for treatment.

In terms of taste, sika deer Velvet is sweet and salty; hence, it will do no good if excess salt is added when cooking. Lastly, ensure you always make the Antler tender by cooking separately for hours before adding to any dish.

I'm a professionally trained baker/pastry chef and also, as a friend would say, an intrepid eater.